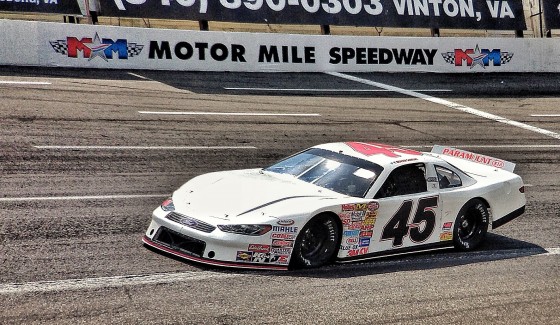 Winston-Salem, N.C. (June 30, 2014) – Dalton Sargeant, and the No. 45 Bassett Racing team had their most successful weekend to date in the 2014 NASCAR Whelen All-American Series (NWAAS) season at Motor Mile Speedway on Friday and Hickory Motor Speedway on Saturday. In the first of two New River Bank 75-lap feature events at Motor Mile Speedway, Sargeant finished in the sixth position and fifth position in the second 75-lap feature, a great result for the rookie as this was Sargeant’s first ever career start a the famed .416 mile Speedway. The team moved to Hickory Motor Speedway for Saturday’s Hendrick of Honda 100-lap event, where Sargeant was battling for a top-3 position on lap 51 when contact was made and he was spun out by the car behind him. The incident would relegate Sargeant to a 19th-place finish at Hickory Motor Speedway.

On Friday at Motor Mile Speedway, track activity began with only a pair of ten-minute practice sessions as Dalton Sargeant began to acclimate himself with a Speedway he had never competed at before. Although a new track for Sargeant, he looked like a seasoned veteran against the best (NWAAS) in the country. Sargeant recorded the second-fastest lap in practice and qualified in the 12th position out of 32 cars. When the green-flag flew on the first 75-lap feature, it was obvious Sargeant was going to stay in the 12th position long as he immediately began to come through the field. By lap 35 Sargeant had moved solidly into the top-10 in the ninth position, but the field had begun to distance themselves and there was a sizeable gap to make up. In the last 20 laps, Sargeant came from the ninth position to finish in the sixth position, all while challenging for the fifth position with 2005 NWAAS National Champion Peyton Sellers right in front. The sixth place finish allowed Sargeant to start from pole position in the next 75-lap feature due to a six-car inversion; this was the first time the rookie had started from the first position. As the green-flag waived, Sargeant was in a fierce battle for the lead, leading a total of six laps but battling side by side for the first position for the opening 20 laps. On lap 21 Sargeant was involved in a three-wide battle for the lead the other two cars made contact causing a massive 13-car pileup that Sargeant was able to avoid. The No. 45 was able to restart on lap 22 in the first position but had damage to the front suspension from the contact. Lap 29 there was another incident, where Sargeant was battling for the lead and the second-place driver became impatient with the 16 year-old rookie, trying to send him a message on the front stretch that inevitably put himself into the wall and out of the event. Sargeant radioed to the team that his front alignment was off, meaning the front suspension had been extensively damaged from the two incidents. Through the course of the remaining 45 laps Sargeant was simply trying to hang on to his damaged machine and each ensuing caution period brought the rest of the field back into contention. Sargeant was able to battle all the way until the last lap, where he finished in the fifth position; giving the No. 45 Bassett Racing team their first top-5 NASCAR sanctioned finish of the 2014 racing season.

Saturday saw the Bassett Racing team having to make quick repairs to the damaged No. 45 and head to Hickory Motor Speedway for the Hendrick of Honda 100-lap event. Sargeant and the No. 45 were not fazed by the rough racing from the night before as they recorded the third-fastest lap in practice. Sargeant was able to back up the results in practice and qualified in the fifth position, the No. 45’s best qualifying effort of the 2014 season at Hickory Motor Speedway. From the drop of the green flag, Sargeant was a threat for the lead as he immediately moved into to the top-three. From lap 25 to lap 45 the No. 45 ran side by side with second position, all while running directly behind the leader. The top-five positions were extremely close, separated by a matter of inches as Sargeant began to get pressured by the cars directly behind him. The No. 45 was boxed in with the leader directly in front, second place to the outside and cars on his bumper rounding out the top five. At lap 50 (halfway through the 100-lap event) the car directly behind Sargeant lost his patience and began to try and move the No. 45 out of the way, each corner Sargeant received contact on his rear bumper. One lap later the No. 45 of Sargeant was spun out after contact on his left rear quarter panel. The impatient driver was penalized and sent to the rear of the field but the damage had already been done, as the tires on the No. 45 weren’t the same after the incident. Sargeant was able to come from 23rd to finish in the 19th position, a disappointing finish after such a promising beginning of the 100-lap event.

Dalton Sargeant:
“What a great weekend for my No. 45 Bassett Racing team, we’ve definitely shown considerable speed the last few weeks but haven’t been able to close out and get the finish we deserved. That all changed this weekend as we were able to get a sixth and fifth place finish at Motor Mile against the toughest competition I’ve ever faced, and had never even seen the facility before the weekend. Along with the toughest competition in the nation, comes the toughest racing in the nation as well. The veterans definitely knew who was in the No. 45 and they tried to move me around and out of their way, but that’s not how I operate. I wasn’t going to move over and let the more experienced drivers by us this weekend and it definitely ruffled their feathers a little bit. It was a weekend that we gained a lot of experience and that the competition knew we were there. I feel like we as a team are picking up momentum and we have the speed to compete for wins, I’m excited to compete at Caraway next week for the Rusty Harpe Memorial and hope we can survive and run upfront in the 171-lap event.”

The next NASCAR Whelen All-American Series event on the schedule for Dalton Sargeant will be the Rusty Harpe Memorial 171-lap event at Caraway Speedway.