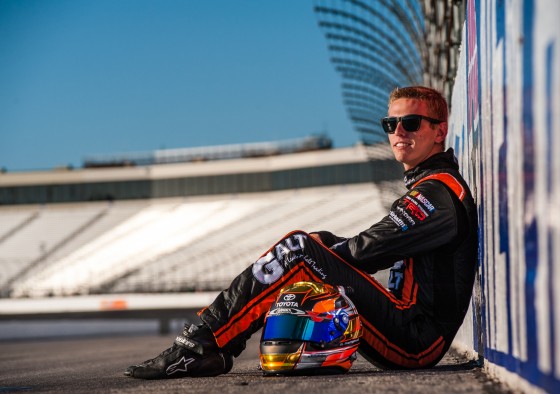 Sargeant impressed with his debut in the NCWTS just last month when he finished 10th at Bristol Motor Speedway after qualifying in the 18th position.

Although it will mark only his second start in a top-tier NASCAR touring series, Sargeant already has two previous starts at New Hampshire Motor Speedway, a PASS Super Late Model start in the Wauters Motorsports No. 5 GALT Toyota Camry in July and also a NASCAR K&N Pro Series East start just a few weeks later. Both runs were spoiled by mid-race contact but Sargeant was able to finish in the sixth position in the PASS Super Late Model event and 12th in the NASCAR K&N Pro Series East event. The Boca Raton, FL high school senior will look to build on those past experiences and apply it for the NCWTS UNOH 175.

“I’m really looking forward to taking on the challenge of making my second start in the NASCAR Camping World Truck Series. We learned a lot a month ago in our debut at Bristol Motor Speedway and were pleased with the end result. Thankfully, we’ve got really great people behind us and our partners at GALT were excited about the Bristol result and ultimately gave us another shot. I really can’t thank everyone at GALT and Wauters Motorsports enough for another great opportunity, it’s really cool to see this group of guys come together, work really hard and outperform some of the powerhouse teams in the Truck Series. We’re hoping to build on and just continue to do exactly what we did at Bristol, earn the respect of our fellow competitors, learn as much as we can throughout the weekend and run all 175 laps. I at least have some laps around New Hampshire Motor Speedway this season and I think that limited experience will definitely help me for the UNOH 175, although the racing disciplines are completely different there are small nuances of the race track that you can apply across the board. The goal is the same for New Hampshire Motor Speedway as it was for Bristol, put ourselves in good positions all night, run all the laps and challenge for a top-10 finish at the end of the 175 laps.  I feel like if we minimal mistakes in the pits and on the race track we can challenge for a really good finish, do we want to win? Yes definitely, but I don’t think we’re quite there yet, we need to continue learning as a group to get better and this race at New Hampshire Motor Speedway is the next step in getting there.”

“It is quite an honor to be back running in the NASCAR Camping World Truck Series with Dalton (Sargeant) at New Hampshire. We are thankful that GALT was impressed by our debut at Bristol last month and they were willing to jump back onboard with us next weekend. Dalton has some experience at Loudon and we hope to have that correlate to a good weekend in the No. 5 GALT Toyota Tundra. New Hampshire Motor Speedway is bar none one of my favorite flat tracks and we expect good things from the race and hopefully back up the top-10 finish we had in Bristol.”

Practice for the UNOH 175 from New Hampshire Motor Speedway will be televised live on Fox Sports 1 at 1:30pm Friday, September 25th and final practice at 3:00pm. Qualifying will be broadcast live on Fox Sports 1 at 10:00 am Saturday, September 26th with prerace coverage beginning at 12:30pm. MRN & Sirius XM NASCAR Radio Channel 90 will begin live coverage Saturday at 12:30pm.